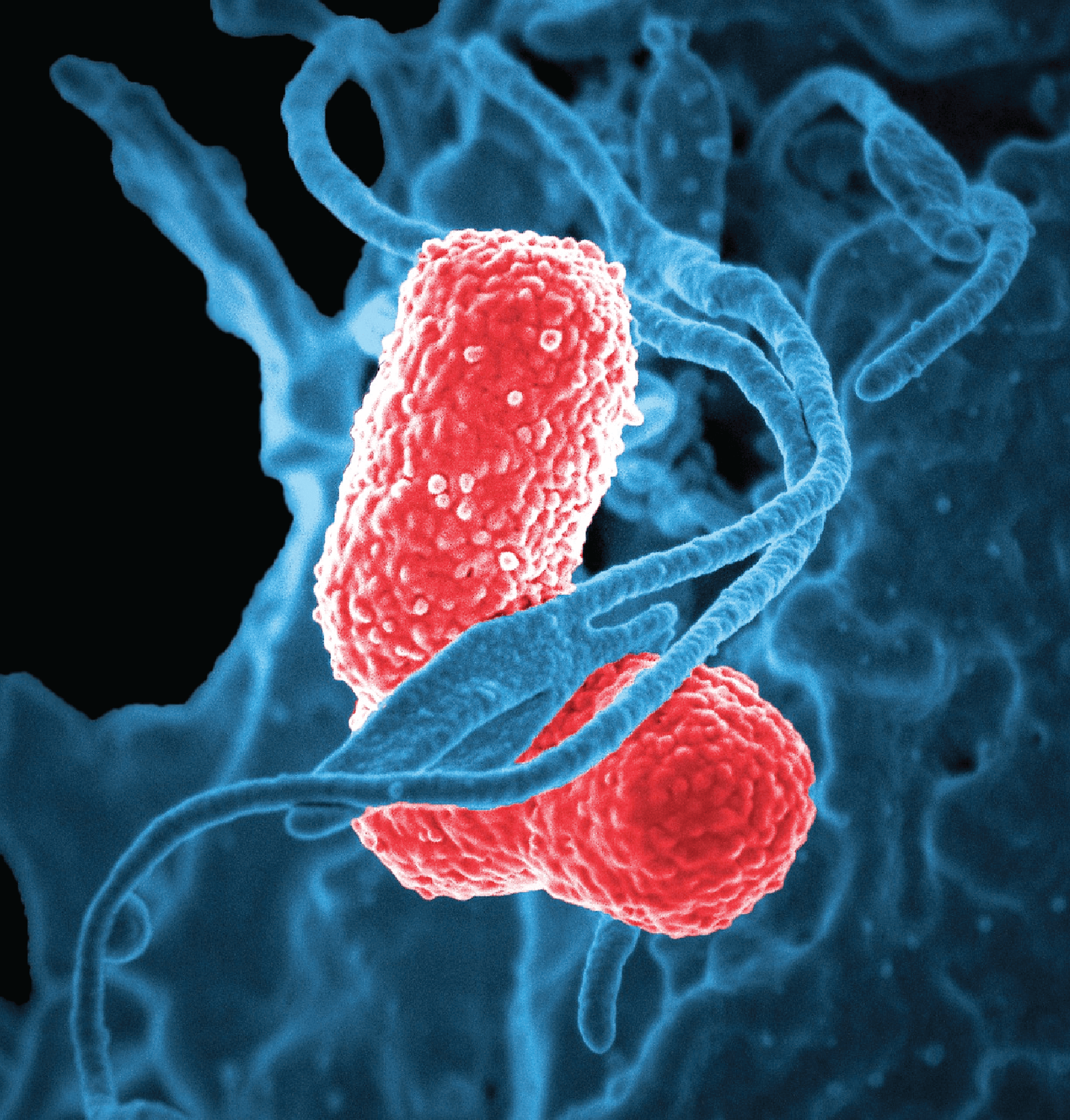 The Nobel Prizes were awarded yesterday, December 10th. Let’s have a closer look at the prize awarded in Chemistry and how the laureates work helped us to literally look at proteins, the molecular machines so central to our lives.

It is, after all, an exceptionally useful, if slightly weird, particle. It is one of the fundamental building blocks of atoms, one of the reasons matter exists. Two atoms can share their electrons, creating atomic bonds, which allows very useful things to exist, such as water or plastic or anything really. It can travel around an electrical circuit to produce electricity, without which modern life would seem impossible. It also can help us see tiny objects with an electron microscope. Objects as tiny as single proteins. For their work towards visualizing proteins via electron microscopy, this year’s Nobel prize in chemistry goes to Jacques Dubochet, Joachim Frank and Richard Henderson.

The electron is hard to grasp for us mere mortals who have a limited understanding of quantum physics. It is fair to say that it is somewhat weird to the uninitiated observer (like all elementary particles, I suppose). It is itself very tiny, it only weighs roughly 9*10-31 kg, gives or takes, which is, well, very little. And while it does exist, it does not occupy any space (at least not in the classical sense). It exists more in probabilities than in certainty. It has a position in space and momentum but we can’t determine both at the same time – if we would know the position rather precisely we would have no clue about the momentum. The electron, being a particle, does behave like one usually. But at the same time it also behaves like a wave. Its wave-like behavior means that it can pull off one of the most impressive magic tricks, it can be in two places at the same time. What it is that makes it behave like a wave is a bit of a mystery as far as I can tell (‘something about it oscillates’ is one of the more nuanced explanations).

But its wave-like behavior makes it possible to use the electron to build a massive magnifying glass, the electron microscope. Note that I am writing all this without really understanding how something can be in two places at once or, in fact, how a particle can also be a wave. I just take it as a fact. I’d guess very few people do understand. What’s more, this slightly strange quantum behavior is common to all quantum particles but if you ask why this only applies for the very small and not for the rather big, why you can’t be at work and on your couch at the same time, for instance, be prepared for some weird explanations. Nonetheless, remember: Electron waves are very useful to magnify stuff.

Looking at stuff with electrons

Scientists spend a lot of effort to make things visible that we normally cannot see. After all, visualizing things is the simplest way to understand them. Microscopy, in all its forms, is a particularly useful tool to visualize stuff. Most people are familiar with a basic light microscope. As kids many might have used one to look in astonishment at a magnified drop of water teeming with life. Light microscopes are undoubtedly useful and have shaped a big part of modern biological sciences. They use lense-systems to focus visible light in a way that produces a magnified image of the observed object. There is a drawback, however. The resolution of a light microscope is limited. It is limited by a physical property of the light you use to observe the sample, by its wavelength. What that means is that objects need to have a certain size in order to be seen through a light microscope, they should be roughly 400 nanometers (to give you a comparison, a human hair is about 50000 nanometers thick) at least. That is good enough to observe whole cells (thousands of nanometers) or even organelles inside the cell (hundreds of nanometers) but proteins, those tiny molecular machines that keep us going, are on average only 5 nanometers in diameter. So we need something else than visible light to observe those: Enter, the electron. Thanks to its wave-like behavior, and the fact that electron lenses (basically a coil of wires) can be built to focus it, the electron can be used for microscopy. The wavelength of an electron beam in a modern electron microscope is about 2 picometers (0.002 nanometers), smaller even than the size of an atom, which makes it possible to see much smaller things than with light. 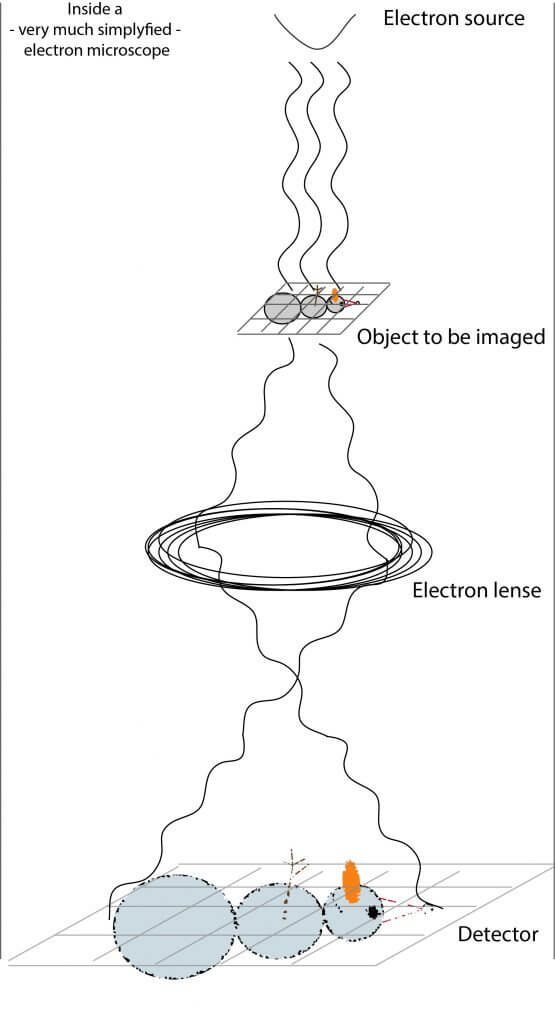 How the thing works

So how does it work? How does an electron microscope produce an image? The easiest way to envision it is that the electron wave travels through the microscope from top to bottom. On its way, the wave will encounter the object to be imaged. This object interacts with the wave (scatters it) and by doing that it leaves an imprint of itself. The wave travels on, carrying the imprint of the object to be imaged. It travels through a lens that will focus on an imaging screen. When the wave hits the screen it will leave there the imprint of the object, hundreds of thousands fold magnified.

Astonishing fact on the side: Every single electron carries the information of the whole image and transfers it to the detector. Since the electron itself is infinitesimally smaller than the detector or the projected image this can only happen if we describe it as a wave (remember, it is not necessarily only in one place at a given time). Can you imagine? Well, I can’t really.

Now, the first electron microscopes were built in the 1930s already so why this year’s Nobel prize? The simple answer is that now we can routinely view proteins in all their atomic detail using electron microscopy and the laureates were major driving forces in making this possible. So what exactly did they do? And why did it take so long until we were able to observe proteins with electron microscopes?

There are several problems with aiming a high-energy electron beam at a biological sample. First of all, it is really damaging to the sample. And I mean really, really damaging. The sample will basically be fried. Second, an electron microscope needs to be operated in a vacuum, which has the consequence that water from the sample will evaporate somewhat instantaneously. With water being a big part of the proteins’ natural environment one needs water to observe a protein in its natural state. Third, it is not always easy to tell the things apart under an electron microscope. To get a proper 3-D protein structure by electron microscopy you have to image not only one but many thousands of the same proteins in different orientations. The problem is to tell apart the different orientations of the proteins you have imaged. 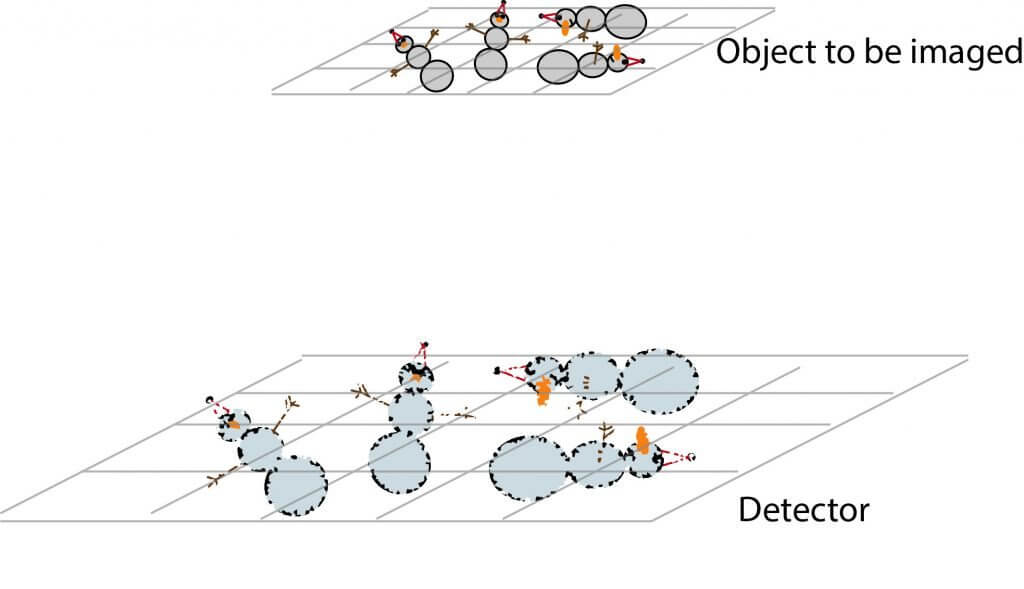 Frank and his group developed computational methods that helped overcome this fundamental problem in image analysis. Their work made it possible to tell apart the different orientations of the imaged proteins and figure out how this particular orientation relates to the 3-D structure. This image processing method lays the foundations for solving high-resolution 3-D protein structures using electron microscopy.

Henderson and his team helped to overcome the first problem, the damage done to the sample by the electron beam. They showed that cryogenic temperatures, meaning very, very low temperatures, can be used to limit damage to the sample and they solved the first high-resolution protein structure of a protein called bacteriorhodopsin. Great progress, however, the problem with freezing samples containing water is that ice crystals will be formed, which makes it basically impossible to image them using electrons (ice crystals diffract electrons strongly)

Dubochet and his co-workers did something remarkable to overcome this problem, they developed a method to freeze water without it forming ice crystals. It’s a process called vitrification. It relies on rapid freezing at a very low temperature. The sample is literally plunged into liquid ethane, a compound that can cool things very rapidly. The ethane has a temperature of -190 degrees Celsius and the sample has to be kept at a very low temperature all the way through the imaging process to conserve the vitrified state.

The vitrified state of water has two advantages, it conserves the natural environment of the protein (only much colder) and the low temperature will help with limiting the damage of the electron beam.

Very nice work I’m sure but why should we care? The pioneering work of all three laureates allows us today to image proteins at atomic detail routinely (well, sort of routinely, there are still challenges) and since proteins are involved in basically every process that keeps you alive, breathing, happy, sad, healthy or sick it is very helpful to know how they look. By knowing how they look we can learn how they operate and how we could possibly intervene to keep you alive, breathing, happy and healthy when you are challenged by disease.

Why you fear science and robots | Fear of the unknown