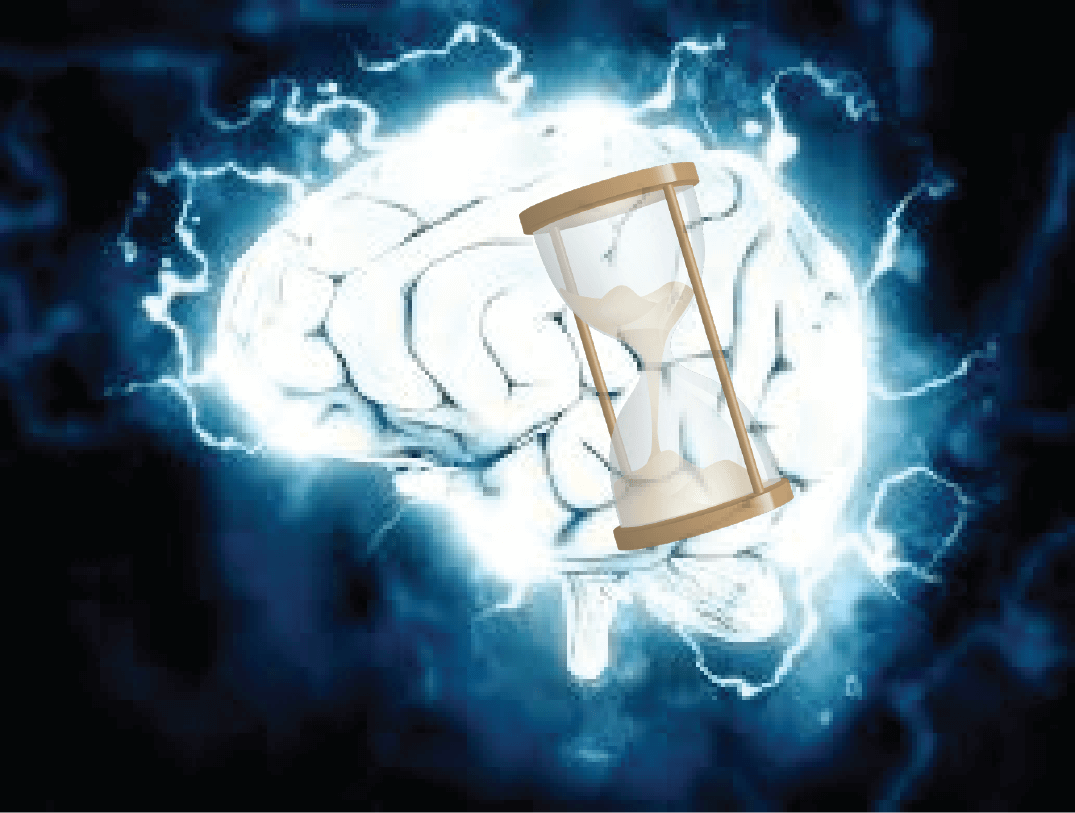 The Nobel Prize Award ceremony is near. On December 10th, the Nobel laureates of 2017 will be presented in Stockholm, Sweden. Let’s talk Nobel Prize in Physiology or Medicine and your internal clock.

You know the feeling, those days after an intercontinental trip, where you’re constantly drowsy, you lack motivation, you’re moody, and not to talk about your unexplainable stomach problems. Although surprisingly similar, you also know that this feeling is not caused by the open bar during your flight. You are, after all, a responsible member of society and would never abuse substances of any kind.

Those symptoms arise from your jet lag. They are next to impossible to avoid, and you have probably tried a remedy or two to fool the brain into the right rhythm, in vain, most of the time. There’s a reason why these cures rarely fully work, and it’s your “internal clock” or circadian rhythm.

The Nobel Prize in Physiology or Medicine this year goes to the researchers discovering how humans, animals, and plants adapt their internal rhythms to be synchronized with the rotation of the Earth. Remember that the “how?” was the award-winning question, not THAT the circadian rhythm was a thing.

This all might seem trivial to you. After all, you probably never googled “mechanistically speaking, why am I awake at day and asleep at night”. That’s a terrible search term. Then again, maybe you did. After all, today’s kids will google anything, it seems.

It should be clear, right? “When it’s dark, we sleep for safety, and during the daytime, we go out to enjoy the day and mind our businesses”. But this does not explain HOW the internal clock works. This part is an intricate mechanism that allows your body to “know” when it’s day or night.

The prize and HOW the circadian rhythm works

Three researchers will share the medicine prize this year:

They discovered the following:

They knew about an earlier discovered gene called period in fruit flies. And they knew that period disrupted the circadian rhythm when mutated. It helps to know that genes in the cell nucleus are copied to form messenger RNAs (mRNAs) and that the mRNAs subsequently exit the nucleus to translate the gene codes into proteins. With this in mind, let’s move on:

The two first researchers mentioned above were able to isolate the protein PER, encoded by the period gene. They also observed that PER accumulates during the night and is degraded during the day.

But how is it regulated?

They discovered that a negative feedback loop regulates the accumulation and degradation of PER. This means that the protein PER itself suppresses its expression. The more PER enters the nucleus, the less the gene period is expressed. 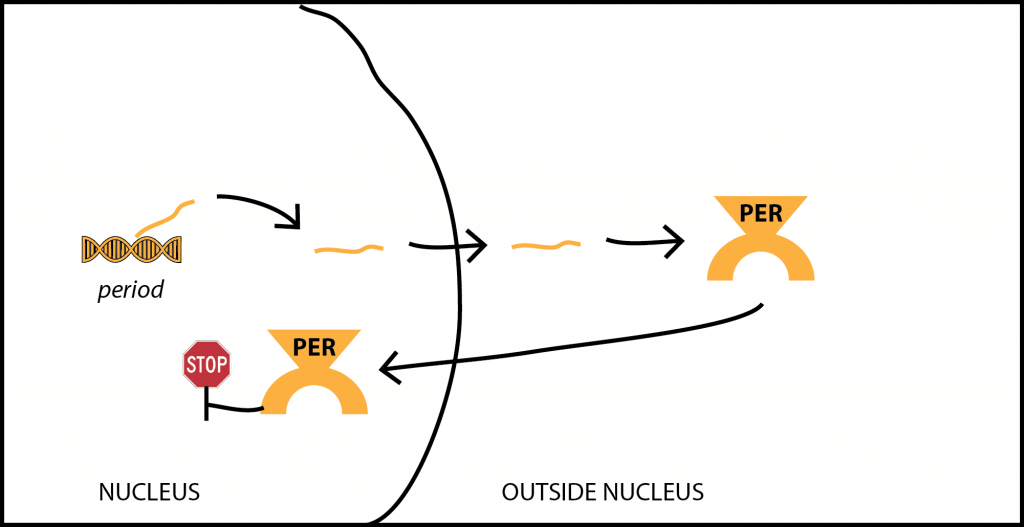 But how is PER entering the nucleus to repress its expression?

This was when Michael Young discovered the gene timeless (silly scientists giving silly names, right?). This gene encodes the protein TIM. TIM binds to PER and allows it to enter the nucleus, to stop its own gene expression. 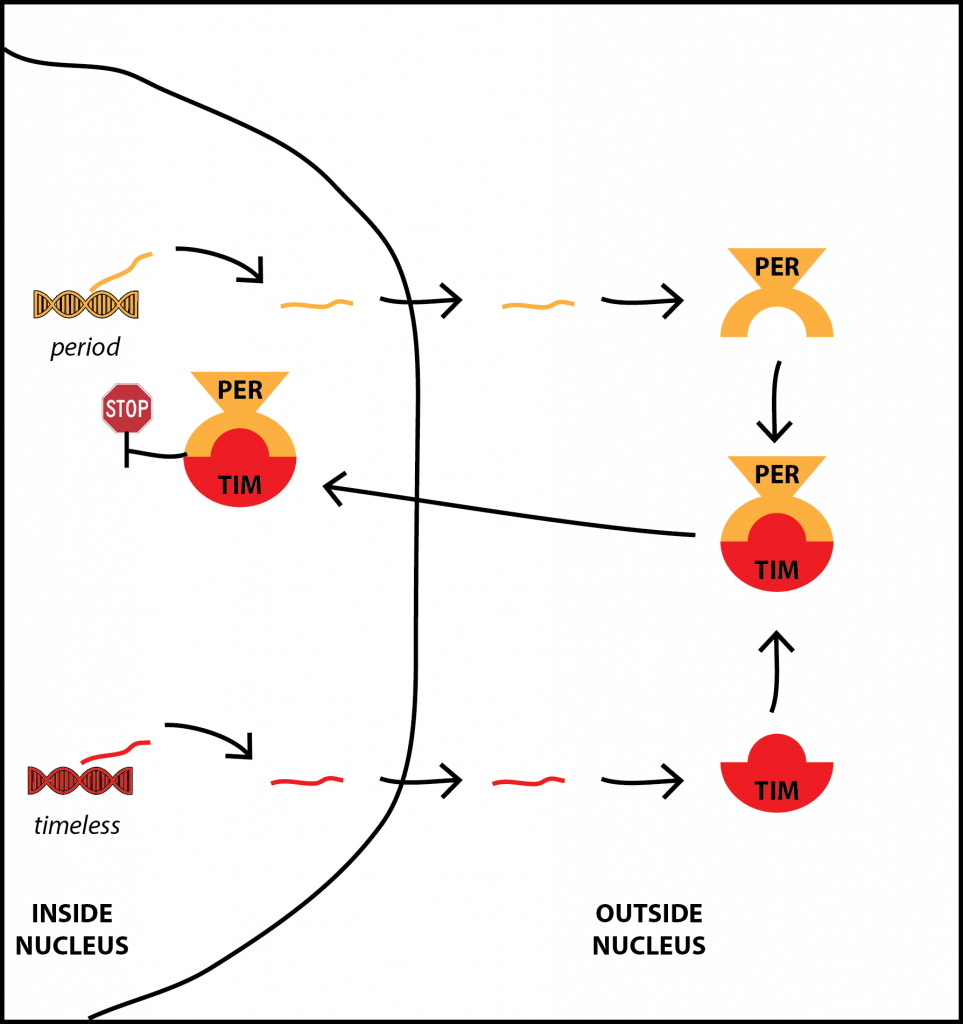 But how is this controlled to happen every 24 hours?

This is the last gene/protein couple we’ll mention in this context, I promise. The answer is the gene doubletime (these names are still cracking me up) and its protein product, DBT. This protein regulates the accumulation of PER outside the nucleus and degrades it inside the nucleus. DBT, therefore, regulates PER accumulation.

And you finally can appreciate the closed circle: 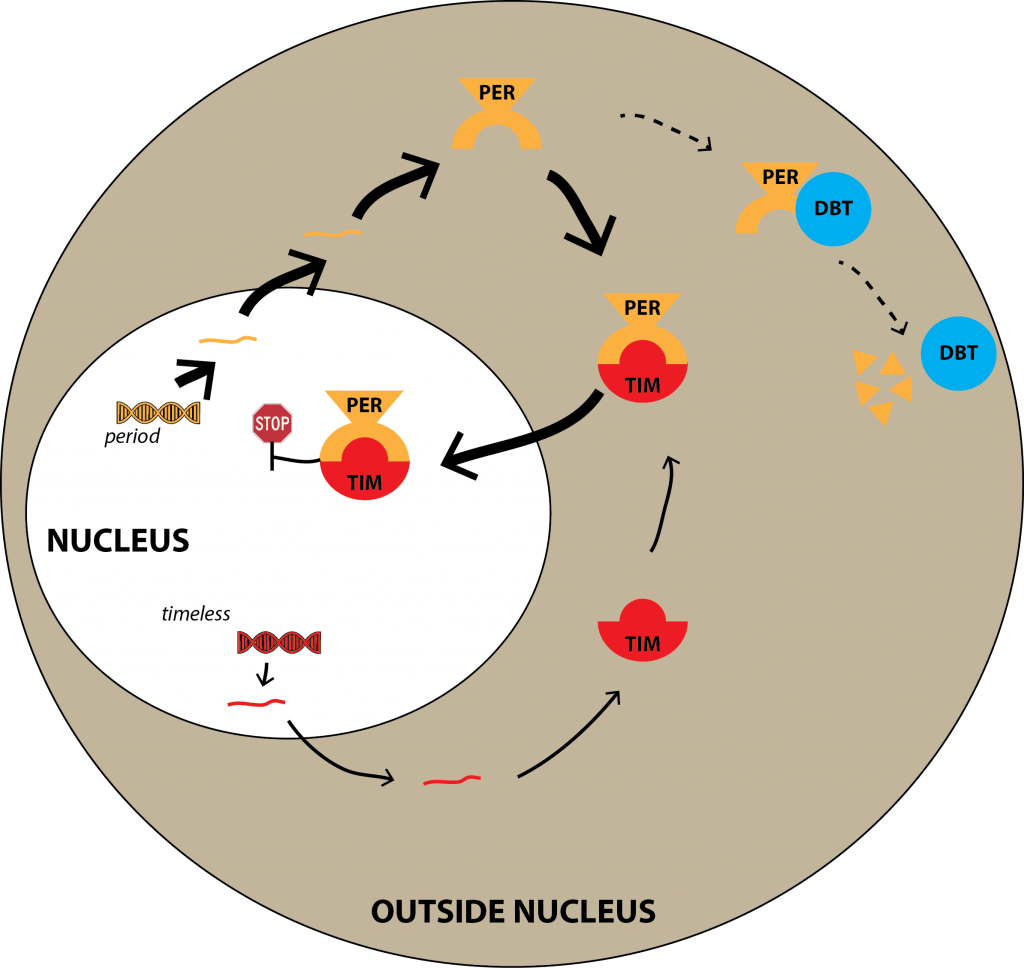 Note: The DBT degradation of PER happens in the cell nucleus as well

Processes like these happen in humans as well. Humans, animals, and plants depend on these processes to maintain a functional internal clock. Moreover, earlier experiments on animals and humans have demonstrated how the internal clock manifests itself in real life.

How does this affect us in our everyday life?

Several experiments on plants, animals, and even humans, starting as far back as the 18th century, laid the ground for this year’s Nobel winners to initiate their projects.

You might already be aware that, even in the absence of natural sunlight, the body can adapt to the rotation of the Earth. This can be observed in your body temperature, hormonal balance, metabolism, and sleep patterns. Believe it or not, you don’t need a watch or an app to keep these physical properties cycling between days. Heck, you don’t even need the sunlight for that.

A series of experiments between the 1960s and the 1980s performed at the Max Planck Institute in Wilhelmshaven, Germany, confirmed this in a pretty cool way. They let test subjects live in rooms, totally isolated from the outside world, for days to weeks. No clocks, no time indication, and sometimes, no entertainment. They did get food and drinks, though.

During these weeks, the researchers measured different parameters, among them urine content, including its amounts of potassium/calcium and rectal temperature, and personal estimation of how long they thought they had been inside the room.

The main findings and the future

This is where the term “circadian rhythm” was coined. Among many other findings, the researchers observed that most test subjects woke up later every day until finally lengthening their average days to between 24.7 and 25.2 hours. The somewhat prolonged daily rhythm of the subjects stabilized and became constant thereafter. Thus, circadian rhythm. From Latin: Circa = approximate, dies = day. There you have it. You know why circadian rhythm is named this way.

The general conclusions are fascinating, even though all the experiments were not performed using the same conditions. Some test subjects could read, study or listen to music, while others were bored with no entertainment. Varying exposure to light could have affected the outcomes as well. Beer was even provided on some occasions.

Still, it’s safe to say that these observations served well for future projects to understand the internal clock.

How can we use the new Nobel Prize-winning discoveries?

These studies still raise many questions that are interesting to investigate. We now know how changes in hormonal balance, metabolism, body temperature, and sleep patterns are maintained more or less constant from day to day.

However, the field is not saturated with answers just yet. There are more questions that can still feed your curiosity. Together with the Nobel Prize-awarded mechanistic findings, many areas related to the circadian rhythm can now be investigated.

⊕ By manipulating the PER cycle and related pathways, will we eventually “treat” insomnia or abnormal patterns in our daily rhythms?

⊕ How does our daily and constant exposure to light affect our natural circadian rhythm? Both behaviourally and molecularly.

⊕ Why do we observe naturally occurring variations in circadian rhythms between individuals? Why is the average rhythm around 25 hours?

⊕ Knowing that circadian rhythms can vary between individuals, does a nine-to-five lifestyle fit most of us?

Who knows, we might be closer to a jet lag antidote that works! No more tiredness, moodiness, or crappy weeks after an intercontinental trip. Free shots of PER in the minibar!

Keep the questions coming. These interesting topics can keep scientists busy and awake… for years to come. Maybe you have answers to some of the questions already. Let us know!

Until next time, enjoy important people in fancy clothing eat, and party for around €1.7 million (about $2.0 million) at the Nobel banquet. I’m sure they’ll broadcast it on a TV or live stream near you.

First CRISPR babies born in China | Is that a good thing?