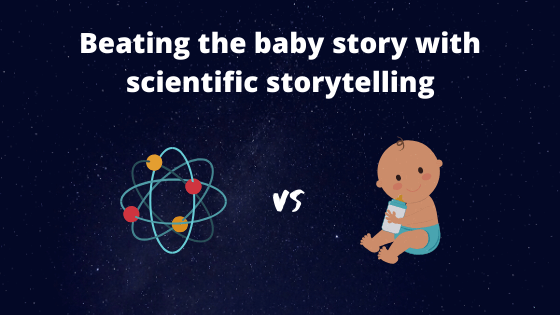 Using anecdotes in a scientific context may be a double-edged sword. Still, we need captivating strategies to replace pseudoscientific stories with better ones without losing accuracy and trust.

The time my niece got a triple vaccine shot

Let me tell you about the time my niece received a triple vaccination shot. She was about a year and a half when it happened. She had shown no previous signs of sickness. On the contrary, my niece was an active 1.5-year-old, as energetic as you’d want a 1.5-year-old to be, and the smile… Ha… That girl’s smile still melts my heart.

Quite unexpectedly (for me, at least), in 2010, my sister received a letter from the doctor telling her it was time to vaccinate her daughter against measles, rubella, and mumps.

“Three shots at once???” I thought, “Is that normal?” Still, as the compliant rascal I once was, I didn’t say anything — not a sound.

The year 2010 my niece received a triple shot of vaccine against measles, rubella, and mumps and about four years later, she got a second shot.

Today, my niece is almost twelve years old. She’s well and alive, my friends. How about that?

The uphill battle against pseudoscience

I can hear you yelling at your screen now. “Why are you doing this to me, Mr. Embassy?? Why would you share a dull and pointless story with me? Why do I keep on reading?” Because I have a point to make. Although this story isn’t exactly a true story, it serves as a good premise, which is that scientists fight an uphill battle against pseudo (FAKE) science. In the, somewhat, confusing and highly frustrating match between science and pseudoscience, the pseudoscientific communities seem to carry a trump card at all times: the anecdotes. Let me explain.

I realized the uphill battle the other week when the Embassy attended the 20th EMBL Science and Society Conference called Science as Storytelling: From Facts to Fiction. (You might have already seen it on our brand-new Instagram profile; #justsayin.) Anyways, in a super exciting talk by mass-communication expert Michael Dahlstrom, PhD, we learned how anti-vaxxers [is it two x’s?] successfully use stories to communicate their “truth”.

I hope I’m not butchering his point, but one of the essential ingredients in pseudoscientific stories is the anecdote, a short story about an incident or person. Just tell a story about a baby who, upon vaccination, developed autism. It doesn’t need to be a baby. Tell a story about a believable character that people can relate to, and you should be attracting an audience. But let’s be honest, if you’re looking for the highest impact, you better spice up the emotions. Trust me, it works!

The correlation between autism and vaccines was brought to light in a 1998 publication. The article suggested that the triple vaccine shot against measles, mumps, and rubella might cause autism. Several research studies since then have debunked this link, finding no causation between vaccination and autism. Nevertheless, the story still lives in people’s conscience and beliefs, even though the journal in question retracted the article and the responsible doctor lost his medical license due to severe professional misconduct [psst… did you know that lawyers who were involved in lawsuits against vaccine companies secretly funded his research? yeah…].

Flawed research could maintain its life with a little help from the anecdotes that emerged as a response.

Scary, right? And if you for a moment think that the vaccine—autism story was an isolated incident then, my friends, think again. You see, many other pseudo stories have prevailed the counteracting efforts of a gathered and next-to unanimous scientific community: the curing effects of homeopathy, alternative cancer treatments, or the denial of human impact on the climate.

Which leads us to the questions that keep scientists up at night:

The art of rebooting false beliefs.

A recurring concern during the EMBL Science and Society Conference was just that. How can we inform the general public about science and maintain three essential ingredients of a scientific story? Namely:

At this point, I don’t remember where the suggestion came from, but one of the speakers or someone in the audience discussed anecdotes as a weapon against pseudoscience. My question became, how would that work? Could scientific stories or anecdotes compete against the pseudoscientific stories? Let’s have a look at the three ingredients, shall we?

Would scientific stories be captivating?

Hell yes! Go back to my story at the beginning of the post and tell me honestly that, at least a part of you didn’t start worrying about that baby. Go ahead; I dare you to admit that a story with sick babies doesn’t affect you. You monster.

Humans are inherently attracted to stories. A good story finds the trigger point in people, something most of us can relate to. And, the more we connect, the more attention we’ll pay.

True story this time: The other day, my sister was complaining about her students at the university. When teaching about the Russian revolution, every single student knew the story of Lenin’s train trip through Scandinavia while returning from his exile in Switzerland. They even remembered details from that trip. But here’s the kicker, not a single one of them remembered facts about the actual revolution. The “when, what, and how” had escaped them all! Gone! Now, why is that?

The answer is in the story, in the anecdote. All of us can relate to someone on a train trip and put ourselves in a similar situation. We become Lenin. The scenery is crystal clear: the walls of the train, the landscape outside, the toilet. You could easily have experienced all those things.

Now, let’s visualize and relate to the Russian revolution. Feel the accumulating economic hardship in Russia after World War I, imagine the abdication of Tsar Nicholas II in March 1917, or visualize to the provisional government that took over after that.

A list of facts and statistics is less captivating, regardless of how accurate it is. Which brings me to…

Would scientific stories be accurate?

Maybe, but the pitfalls and traps are lurking behind the bush. During his talk, Michael Dahlstrom pointed out that we don’t want to fight or debunk pseudoscientific stories; we want to replace them with new, better, and scientifically accurate narratives. I think he’s right. But here’s where the story becomes tricky. What beats a story about a sick baby? [And don’t yell out “puppies” because that’s not where I’m going with this!] The answer is probably “Another story about a baby or even an adult, a character”. Anecdotes are powerful.

The problem is that research findings require more than an anecdote. Proper experimental conclusions often rely on large populations, and the larger, the more accurate. For example, we study hundreds of people, thousands of flies, or millions of cells. Once you have your results in front of you, you often need to reproduce your results under the same conditions in so-called biological replicates. The replicates serve to discard coincidental results or fluke. To complicate things, I’ll trust your findings even more if someone else – someone you don’t know – can show the same results somewhere else.

Here’s where the boring statistics take part in the story and where people (not you of course) lose interest. Where’s the baby story!?

Since pseudoscientific stories don’t need to be accurate – after all, they just need to stir that spicy pot a bit – their lack of accuracy is unproblematic.

And, here lies the scientist’s true handicap. As a scientist, your anecdotal evidence is not enough because it may turn out to be coincidental and, hence, inaccurate. Once that happens, you and all your pretentious scientific friends will lose all credibility. That’s why I believe that scientists fight an unfair uphill battle against pseudoscience. You need to abide by additional and more intricate rules:  We should be captivating, but never at the expense of accuracy. Accuracy’s a bitch. So, finally…

Can scientific stories be trustworthy?

Not as long as the science is inaccurate, but it doesn’t need to, which brings me to my solution.

You can use colorful, active, and funny language to communicate scientific findings. In fact, several science communicators, channels, and programs produce awesome scientific stories, and they attract lay audiences like I attract mosquitoes on a rainy summer night. So, what’s the secret, Mr. Embassy?

This part is mainly for scientists. See it as a rough guide to scientific stories

Conversation: Talk to your audience as you’d talk to a good friend. Don’t lecture them about how they’re wrong. You’re not going to convert anyone by yourself. Replacing faulty stories with better ones is a collaborative process; we all have a role.

Know your audience: Who’s your listener? Does she or he need to hear ALL the details of your story? Don’t be a grandmother. Don’t tell me a never-ending and irrelevant story about your favorite protein that transports another protein in an eternal journey to the nucleus. It makes me want to take a red blanket and cover my head in it for a while.

As you see, all components of science can be a character: the cancerous villain, the treating hero, and the poor little patient baby.

And the accuracy? Well, that depends on the research. But why not explaining the research first and THEN tell an anecdote that puts color to the study? Or why not reverse it by telling a colorful story and THEN support it with related science?

When scientists claim that stories are inaccurate and they conflict with reality, I believe they’re wrong. We simply need to explore storytelling a bit more and take advantage of this powerful tool that has supported our memory since we started speaking. I invite any hands-crossed researcher to take a step down those stairs of the ivory tower, become more relatable, more like the average Joe or Jane, and just… relax.  Start telling your stories, because, after all, it’s your duty.

Until next time: Stay critical!

How to recognize pseudoscience: 5 common traits

Why keeping the cure for cancer secret is implausible and dumb
Tags: anecdote, pseudoscience, stories, storytelling

CAR-T therapy against ALL

Everybody wants EMA – the relationship drama about drugs

Are CRISPR designed babies the future? Update 1 year after birth