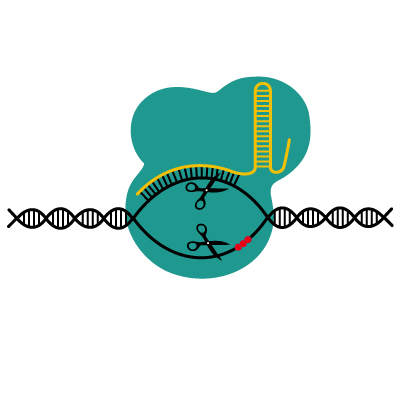 CRISPR-Cas is the tool that is on people’s lips right now, not only scientists’ (in our opinion, at least). The media discusses designer babies, disease-resistant crops, and many other applications. It could play a significant role in our future everyday lives, and because of this, it’s important to understand it to be able to make qualified decisions once it knocks on your door.

What is CRISPR-Cas, how does it work, and how can we manipulate genes?

This will be an overview of CRISPR-Cas. To better understand how it edits genes, go to our previous post on Genome editing and how we cut and manipulate genes in our DNA. Here you can learn about other genome editing tools as well.

We hereby present you with the basics of the tool. The future is now.

To cut the DNA and induce mutations where you want the mutation to be.

Cas – the endonuclease that cuts the DNA

The CRISPR-Cas technology was derived from the bacterial immune system, which is used as a defense mechanism against phages.

CRISPR is an acronym and stands for Clustered Regularly Interspaced Short Palindromic Repeats. The function is in the name; let’s decrypt it:

Cluster: A group of similar things. Occurring closely together.

This is just one simple example, but there are many forms of these in DNA or RNA. The palindromic repeats of CRISPR form hairpin loop structures:

Regularly Interspaced: Imagine now a group of these palindromic sequences have other types of sequences in between them, separating them from each other. These separators are the spacers, which are short DNA sequences. Together, these short sequences form stretches of several spacers.

And boom, we have the explanation for the name CRISPR! Let’s try it again, formulating it differently: These repetitions containing short palindromic sequences seem to be regularly interspaced by spacers, forming a repetitive stretch of these two types of sequences.

While we’re doing this, Cas (often seen after the word CRISPR) stands for CRISPR-associated system. Endonuclease is a protein that cuts the DNA in two (coming up now).

CRISPR-Cas is the name of this bacterial immune system.

The bacteria use CRISPR as a defense mechanism against pathogens like phages. These pathogens normally aim to introduce their DNA into the DNA of host cells (such as bacteria) (1). Once the DNA of such a pathogen has been recognized as malicious or foreign, the DNA is degraded by bacterial proteins. From this degradation, a short piece of the pathogen’s DNA is stored as the bacterial “memory of hostile sequences” (2) in the form of spacers (see above).

This memory storage is conserved for future pathogen attacks. It’s a good preparation; the next time the same sequence is presented in the bacterial cell, it is ready. The guide-RNA can now be processed from the CRISPR system (3) and (4) and form a complex with the Cas (5). The guide RNA will lead the Cas to the new intruder and direct it to cut the foreign DNA (6). A pretty robust surveillance complex for such a simple cell. 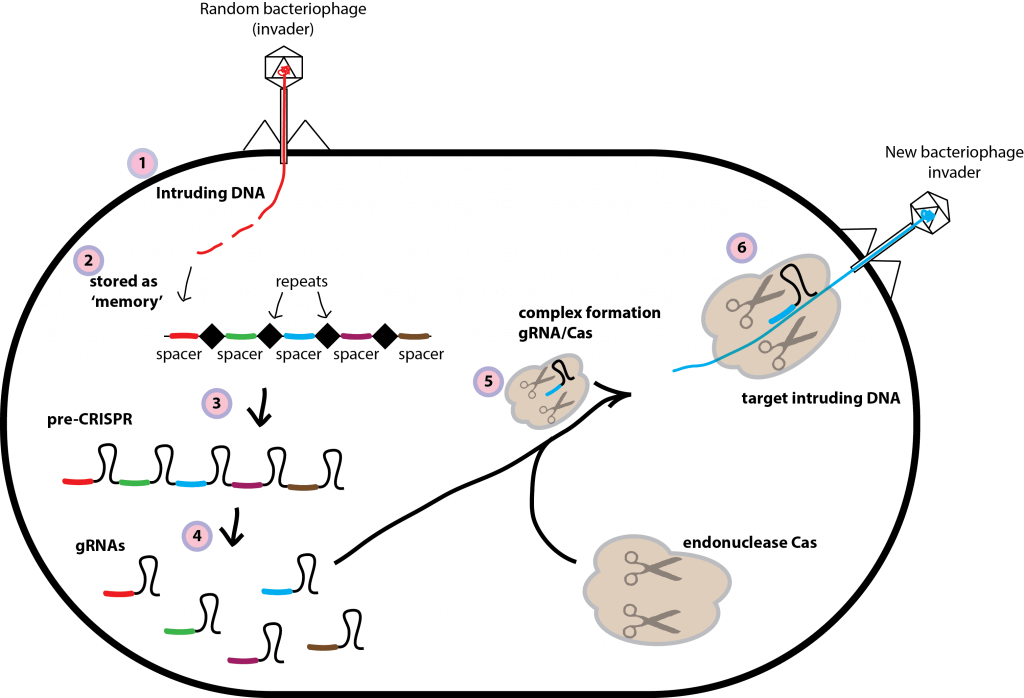 The defense mechanism explained above is specific to bacteria and does not naturally exist in humans and other multi-cellular organisms, such as animals, plants, etc., that have different immune systems. However, in 2013, CRISPR was developed as a tool to cut the DNA of humans and mice. Shortly thereafter, it also became possible to target other types of organisms. You can have a look at this timeline to see how CRISPR was discovered and further developed.

Several Cas proteins are used in research, and many are being tested to optimize the tool. As mentioned above, different Cas have different properties (recognition, cutting site, and cutting efficiency, to name some).

The most commonly used Cas is Cas9. We will in this post mainly focus on Cas9, everybody’s sweetheart. Don’t worry if you’re more into another Cas-type; the concept is similar for all endonucleases.

How do we introduce CRISPR-Cas to the cells?

There are several ways to introduce CRISPR-Cas to a cell. The most common way to do it is by introducing DNA expressing both the guide RNA and the Cas in the cell.

This approach requires the transcription and translation of the guide RNA and the Cas inside the cells. It takes a bit longer, but it’s a stable way to introduce the complex to a cell.

It is also possible to introduce the protein/guide-RNA complex to the cell. Kind of like a ready-to-use complex. This is immediately active in the cell. However, a drawback of this strategy is that it’s more transient than using plasmids due to the short half-life of the protein.

So ultimately, the method we choose depends on what we want to do with the CRISPR. If we want it to be active for an extended amount of time, then integrating it into the cell’s genome by introducing DNA is king. If we want it to act fast and disappear A.S.A.P., then the introduction of the protein is the way to go.

How does it recognize the right DNA sequence?

The targeting process is similar to the bacterial, but with fewer processing steps. Simply put, the CRISPR we use in cells has the guide RNA (containing the spacer) and the Cas endonuclease protein. We can design the spacer in such a way that it recognizes and bind to a specific sequence in the host DNA. This target sequence is the protospacer and is usually about 20 nucleotides in length.

One requirement is crucial for targeting the protospacer, containing a so-called PAM motif upstream of the sequence. PAM stands for Protospacer Adjacent Motif and is a short sequence that makes the first contact with the endonuclease Cas. Cas scouts the whole DNA for PAMs and makes contact with them. So, no PAM means no Cas binding. 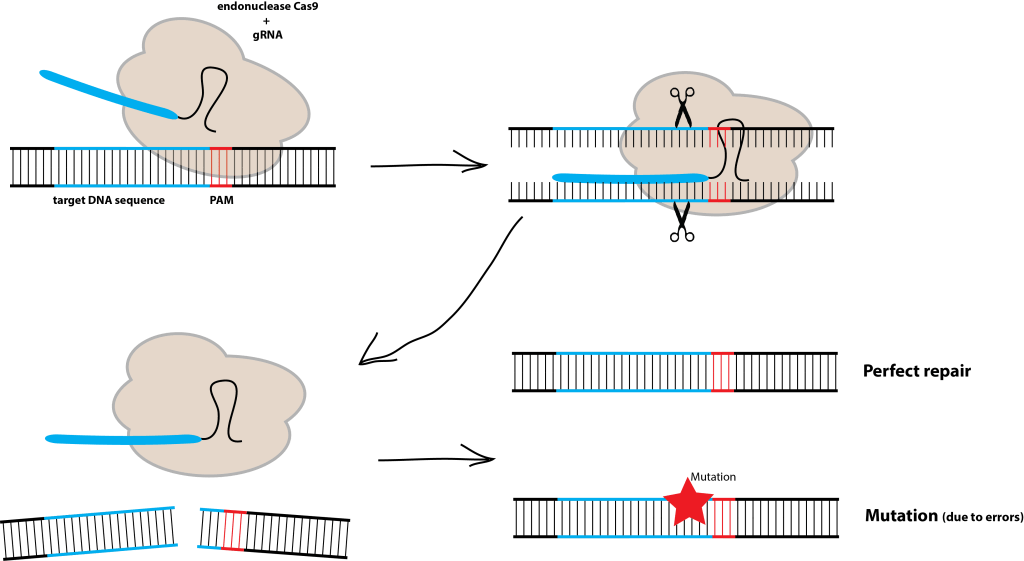 Let’s get more detailed. The PAM for Cas9, for example, is ‘NGG’, where N means any nucleobase.

Remember that DNA contains four nucleobases: A, T, G, and C. So, Cas9 can recognize the following PAMs: AGG, TGG, GGG, or CGG.

Once the PAM with the corresponding protospacer has been found, the rest of the complex can also bind.

What can we do with this?

The most common use of CRISPR-Cas is the introduction of mutation by cutting both DNA strands. The DNA damage repair machinery of the cell will glue the cut ends together. This can lead to mutations if the DNA repair machinery makes small errors while repairing. And could lead to an abnormal gene expression and/or loss of function.

With this, we can answer questions like, “what happens to my cells if I mess up THIS gene?”. Now you will know!

How about the off-target effects?

You are familiar with CRISPR-Cas, which is how the tool generally works. If everything works as we want it to work, that is. A concern with the CRISPR-Cas tool and an ongoing field of investigation is the off-target effect that is associated with it. The off-target effect is the tendency of CRISPR-Cas to bind and modify (cutting, interfering, activating, etc.) the wrong gene or sequence. This can, of course, have detrimental consequences for the host cell and its functions. Think collateral damage here: you want to target and modify gene A, but in that process, you also target and modify genes B and C. Imagine now the consequences of this if, for example, gene C is an important gene for the well-being of the cell. Not optimal at all…

There seems to be a disagreement in the research community about how common these off-target effects are and how prevalent they are when using CRISPR-Cas. Here are other off-target-related questions that are quite interesting to think about:

⊕ Is it cell type specific? Some cells can be more prevalent for off-target than others.

⊕ Is it gene-specific? Some genes can be more prevalent for off-target than others.

⊕ Is it even a problem? It might be that they are not common enough to cause a problem

These are real concerns and are under a whole lot of investigation. We hope we will be able to update you and cover all these questions with time and as they are revealed.

CRISPR-Cas has revolutionized the field of biotechnology and has quickly become the go-to tool for genome editing. The quick expansion of the tool has led to wide accessibility, allowing all researchers to use it. This is, of course, a good thing; no complaints here. However, at the same time, there are a lot of unanswered questions regarding this technology. The off-target effect is obvious, but there are other mechanistic questions, important ethical concerns, and agreements that must be dealt with internationally.

We’ll dig into this and do our best to keep your brain updated in this field. We’ll keep it crisp… you know… Anyways, there’s more to come.

The S.H.I.T. Show and how it all started, Interview with the organizers